According to the U.N. Office for the Coordination of Humanitarian Affairs, one in two people in Syria are at risk of death and injury because of unexploded ordnance left behind by conflict. Landmines, cluster munitions, and other explosive devices have left a deadly legacy across the country. They kill and injure people, prevent communities from using their land, and stop displaced populations from returning home safely. In 2022, an estimated 10.2 million people live in areas contaminated by these remnants of war. That’s roughly the population of Sweden.

A few weeks ago, MAG’s Director of Engagement, Jon Brown, visited communities in Syria, to learn more about the impact of MAG’s activities and meet some of the teams carrying out this lifesaving work.

Between 2015 and 2018, many of the places he visited were at the front line of the conflict. There have been several deaths and injuries, and residents still report seeing evidence of mines near or inside their communities. Such high levels of contamination also prevent communities from recovering economically, and put an added strain on health, rehabilitation, and psycho-social support services.

The brave work of MAG’s deminers to locate and clear unexploded mines and bombs enables communities’ conflict recovery activities, delivery of humanitarian assistance, and the safe return of displaced people and refugees.

Here are four people Jon met on his recent trip:

It's 7 a.m. and deminer Aisha sips strong, sweet tea while her colleagues prepare equipment for a day in the minefield. It's a special moment for her and she could be forgiven for some nerves - after four weeks of training, this is her first day in a minefield.

Aisha, who is a mother of five from Raqqa, said "I'm a little nervous of course but I feel confident that I know what to do and that our managers will give us the support we need. My husband has a good job so I'm not doing this for money - I want to help people and also develop my own career. My family encouraged me to apply for the job and are very proud of me."

Aisha is part of a team working to clear a hazardous area outside of a large village approximately 200 miles from Raqqa. She expects to be redeployed to Raqqa, where she will be nearer her family, in the coming months.

Over the next three months, her team hope to clear roughly 51 acres of farmland, benefitting more than 1,000 people in the local area.

Ali is a farmer from a small village on the outskirts of Raqqa. In his village alone, there have already been four accidents as a result of improvised landmines left behind by conflict.

For him, the landmines offer a particular challenge. His olive grove of 50 trees – an important part of the family’s income – has now been untended and unharvested for four years.

"When the accidents happened, I just became too scared. When this land is cleared it will make such a difference to our lives. Our community has suffered so much from the conflict. When we returned after the war, our houses were destroyed and our animals had disappeared. To rebuild your life in such circumstances is hard.”

A MAG team of 20 Community Liaison Officers have patiently gathered information about the suspected landmine contamination in this village of 400 people and expect to begin work on clearance in the coming weeks.

Hamed, the village mayor, said “When we first came back there were many accidents. Two people were killed, a young boy was injured, and we were scared for ourselves but mostly for the children. We were so happy when MAG staff first came here and now we can look forward to a future where we know we will be safe from the landmines that were left behind."

When Maryam, her sister, and father first started working for MAG as deminers, they told their mother that they had jobs picking potatoes.

Maryam said “We knew she would worry about us but after about a week, once we had had some training and knew more about what our jobs would entail, we told her the truth.”

That was back in 2016 and helping to free their communities of fear by clearing landmines has become not just a job but a career and a vocation for the two sisters and their dad.

Maryam, 25, added “Mom was scared at first but now she’s very proud of us for doing such difficult work that helps our communities. We are part of our country and we are helping to save our country. Some people asked our father why he would let his daughters do such work but he has always been supportive and is proud of us. It’s a difficult job of course. You have to be patient, it’s sometimes very hot and the equipment is heavy after a long day. But I love my work and I love my colleagues. My dad and sister are real family but the rest of my colleagues are like family as well.”

Her sister Saba, 26, said “It’s a nice feeling working with your dad and your sister, though we don’t always work as part of the same teams. I feel like I’m at home even when I’m at work. And of course, we always end up discussing work when we’re at home!”

Their dad, Ali, said “I am happy my family is playing an important role for our community. My daughters are very good at their jobs and that makes me very proud to be their father.”

Shafiq was 11 when his life changed forever. He was returning home after grazing his family’s sheep when he spotted a shiny object lying on the ground. He picked it up, curious, and started to play with it. He was less than 110 yards from his family’s home.

“I didn’t know what it was and I hit it once with a stone,” said Shafiq.

The next moment, Shafiq was lying on the ground, covered in blood.

“I couldn’t see anything and started to crawl. People in the village heard the explosion and my uncle came running. He wrapped cloths around my right arm and hand to try to stop the bleeding and I was taken to the hospital.”

Shafiq’s right hand had to be amputated and he was blinded in his left eye.

“Everything has changed for me. It affects me in every way and I fear for my future,” said Shafiq. His parents are seeking help to get a prosthetic hand for him, but such support is rare and expensive in Syria. 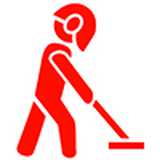 Land released by deminers and machines

We believe that everyone, from farmers like Ali to children like Shafiq, deserves to live free from fear and danger of past conflict. Because of hardworking people like Aisha, Maryam, Saba, and Ali, more families in Syria can thrive on land free from dangerous explosive weapons. MAG has been operating in Syria since 2016 to make land safe for populations affected by years of conflict, as well as providing vital risk education so that people, especially curious and vulnerable children, understand the hazards they may encounter.